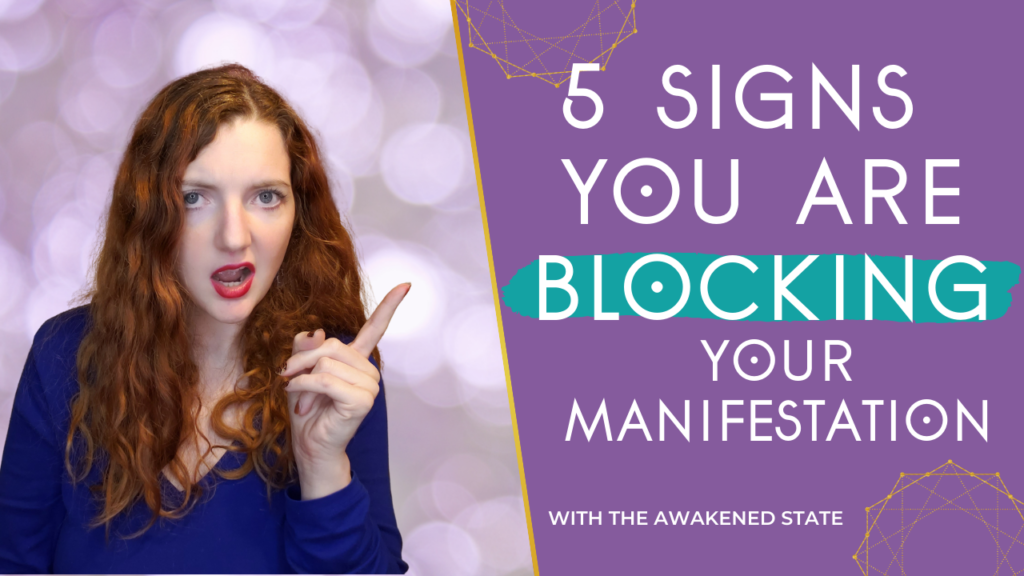 Guys, it’s time to stop dancing around your manifestation and look at what is going on below the surface if it is not showing up for you.

One of the easiest ways to manifest is to start building up your awareness around where you are blocking your manifestation.

However, you gotta be willing to Look at it!

This means Let’s Look at where you are stopping yourself from receiving or potentially stuck in a cycle of self-sabotage with your manifesting.

Today I’m sharing with you the top five most common Signs you are blocking your manifestation. Pay Attention to which one stands out to you the most, this is the one I would work immediately on shifting.


Before we jump in, I wanted to mention one thing:

The word “block” often gets a bad wrap, making it look big, scary or just impossible in our minds. Let’s get this straight as we explore “blocks” – blocks are merely limited perception in our minds.

They are not some unstoppable boulder on your Manifestation journey – they are you being in a limited belief or perspective of the world around you that is guiding you to shift out of it into a new perspective. That’s it.

Now that we got that out of the way – Here are top five signs you are blocking your manifestation – tune into the video for the full download.

So what is number one?

Number one is knowing that you are clearly deflecting seems kind of obvious however deflecting is really tricky it’s kind of bizarre because you’re almost doing it unconsciously. It’s where you’re seeing these affirmations, you’re setting your intentions for your manifestation but one thing that’s happening is no matter what you do no matter what you say you just keep sabotaging it.

There’s this deflection going on behind the scenes and this deflection can look like refusing to get into action, lack of motivation, lack of doubt, like getting in a place where you’re full of self-doubt and lack of self-confidence. In this space we’re deflecting the manifestation so for instance maybe we’re working on something and then someone compliments us but we immediately just completely dismiss that compliment by criticizing ourselves.

If you think about where are you refusing to receive? That is nine times out of ten a deflection and that deflection is happening because you’re refusing to accept your manifestation

MANIFESTING BLOCK: RECREATING A PATTERN OVER AND OVER

Repeated signs that you are recreating a central pattern in your life so this is something where you are constantly fixating on a problem. You’re constantly fixating on this problem, it’s putting you in a basic energetic plateau really and you keep recreating the same cycle over and over and over and over again. When we do this and we start to see that we’re conscious that we keep doing it, what we’re doing is we’re definitely stuck in an imbalance within our chakras and definitely in our manifestation. What is going on is we’re stuck on the problem-based channel and we’re refusing to step into the solution.

There’s a reason why we do this it’s because there’s a secondary gain that needs to be met before we are able to transition into the manifestation so we do this often when we are refusing to heal a vibration in our body.

I keep putting it off, i keep waffling around, and I keep being ridiculous about that action. When i’m in that place, i’m in a pattern.

That’s a pattern that is showing you where you need to heal and there’s a root cause, a root association that needs to be healed in order for you to personally transcend that pattern.

MANIFESTING BLOCK: WHERE THE RESISTANCE MOST SHOWS UP

This is showing you that this big ball of resistance is what the imbalance is, this is the central block that keeps occurring and keeps cycling and keeps repeating as a pattern in your life. It’s all dominated around that sense of basically your resistance patterns.

So that resistant pattern that keeps appearing such as you always get angry about a certain thing or you always are upset about something particular and then it keeps cycling back and forth, back and forth, it’s because there is something underneath the surface that is needing to be dealt with. That is another reason why we often have a sign or symbol showing us that we’re blocking the manifestation.

Another really common one is we’re constantly complaining about it, we’re constantly complaining about the manifestation, and well it’s just not there yet, it’s just not here yet… well it’s not here yet because you’re repeating the same pattern and then you’re in the resistance of it. So it’s dominating your life like quicksand and then you’re complaining you don’t have it, as you’re in a state where you’re completely in the problem and you cannot see the solution properly because you’re in the problem-based energy!

so one of the hugest ways we can look at this is starting to look at well where do I constantly complain?

when we start to kind of turn the dials on what are the conversations we’re saying to ourselves and look at them from a lens of objective awareness, we can start to change the way we’re looking at things.

This will show us well in the state of the manifestation obviously there’s some pent up energy going on behind the scenes and this sign that I’m complaining about things and I’m in a state of resistance and I’m repeating the same pattern and I’m deflecting that pattern is all kind of pinpointing one thing that there something going on energetically that I’m refusing to see, that I need to do to essentially embody the manifestation.

Finally, we often block the easiest when we are only in a state of limited mind. We can often know that we’re blocking our manifestation by looking at where are we incredibly narrow-minded in only seeing one personal perception of this idea?

This one’s a little bit trickier because we kind of do this unconsciously, so until we’re willing to we start to question things we’re not fully aware that we’re doing this!

when we come at it from that lens i was only looking at meditation from well I have to sit in silence i have to do it this was, I have to do it in the set way what if that’s just one limited perception of reality to choose from? Instead you begin to realize that actually meditation can be a free-flowing experience for you where you could go on a meditative walk or have some guided music or if you have a really hard time meditating then go get guided meditations and get like a freaking album of them and then do that.

it’s the same thing when you think about it you could only see this one certain way of looking at something and instead you start to open your mind to different perceptions of how you could potentially see that problem when we do this you can easily tell that you’re in a limited perception of reality. In this limited perception is only one one idea that you are attaching yourself towards so we can see this as a sign that you’re blocking the manifestation because you’re stubborn and you’re not willing to look that there could be more possibilities

if I was willing to give up this one limited idea. I call this: moving from the limited mind into the limitless mind because what we’re doing is we’re moving away from limited consciousness into limitless consciousness.

Hope you enjoyed the top five ways we often block our manifestation!!