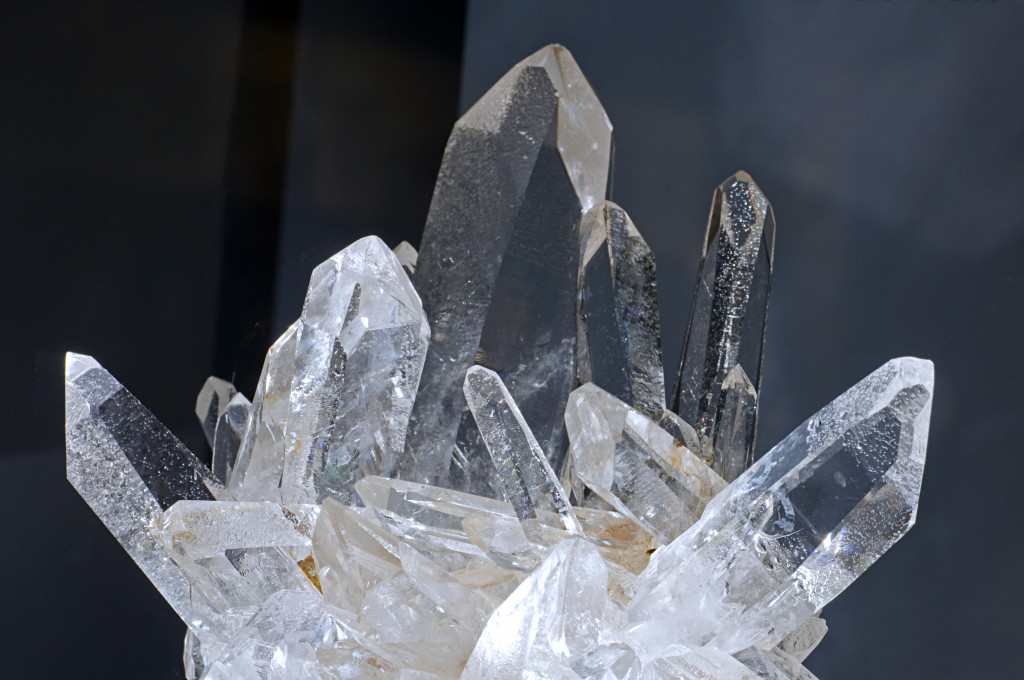 Whether the glimmer of a clear Quartz or the darkened violet hue of a Amethyst, crystals have remained popular throughout time. They are beautiful specimens that have been used for centuries dating back even to the Egyptians where they have been used as collective ornaments, jewelry, healing tools, and even talismans. In Sumerian mythology, the goddess Inanna journeyed into the underworld carrying Lapis Lazuli rods where she measured time and the length of a person’s life. It was believed crystals were the flesh of the gods and that the gods were crystal beings. [ref]Judy Hall, The Crystal Bible 2 Cincinnati, OH: Walking Stick Press, 2009[/ref] 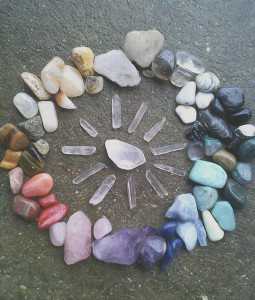 A Crystal is formed by the solidification of chemicals such as ions, molecules or atoms where it has a regularly repeating internal arrangement that is formed in a lattice-like pattern, bound by external faces. Crystals are powerful energy oscillators that have geometric vertices within their formation due to their internal compression. Most people know them as minerals of Earth Science or metaphysical gemstones in the New Age world but did you know that without crystals your electronics, your cellphones, watches, your car radio and even computers wouldn’t exist if it weren’t for the miraculousness of Crystals!

Quartz Crystals in particular have been used for years to give an accurate frequency for all radio transmitters, radio receivers and computers.[ref]http://electronics.howstuffworks.com/gadgets/clocks-watches/quartz-watch2.htm[/ref] “Quartz crystals are manufactured for frequencies from a few tens of kilohertz to hundreds of megahertz. More than two billion crystals are manufactured annually. Most are used for consumer devices such as wristwatches, clocks, radios, computers, and cellphones. Quartz crystals are also found inside test and measurement equipment, such as counters, signal generators, and oscilloscopes. ” [ref]http://en.wikipedia.org/wiki/Crystal_oscillator[/ref]

All types of Crystals emit a frequency of energy and this frequency generates into an electric charge that creates a particular effect known as the Piezoelectric effect. The Piezoelectric effect works by compressing a material form to generate an electric charge. For instance, Quartz is chemically formed of silica or silicon dioxide  which is unaffected by most solvents and remains crystalline to hundreds of degrees Fahrenheit. Therefore when it is compressed or bent it generates a voltage. The Quartz then works like a tuning fork where it provides accuracy and measurement of time.

According to How Stuff Works: “Modern quartz watches now use a low-frequency bar or tuning-fork-shaped crystal. Often, these crystals are made from thin sheets of quartz plated like an integrated circuit and etched chemically to shape. The major difference between good and indifferent time keeping is the initial frequency accuracy and the precision of the angle of cut of the quartz sheet with respect to the crystalline axis. The amount of contamination that is allowed to get through the encapsulation to the crystal surface inside the watch can also affect the accuracy.

The electronics of the watch initially amplifies noise at the crystal frequency. This builds or regenerates into oscillation — it starts the crystal ringing. The output of the watch crystal oscillator is then converted to pulses suitable for the digital circuits. These divide the crystal’s frequency down and then translate it into the proper format for the display.” [ref]http://electronics.howstuffworks.com/gadgets/clocks-watches/quartz-watch2.htm[/ref] The quartz watch is only a small example of the numerous technologies that have been created using crystal oscillators.

The Effect on Color and Healing:

Another component to crystals that is often missed is the effect of Color.
Issac Newton as a young physicist did an experiment that changed the entire view of how we see color. He situated a glass prism in a darkened room this way a beam of sunlight passed through  and separated the elements of light into a rainbow on a screen. This simple experiment became the origin of how we see color. Afterwards after much controversy he decided to perform the same experiment but in reverse. Newton discovered by passing colors back through another prism and rejoined them to produce white light it shows color is merely reflected as a mirror from light itself.[ref]Campbell, Dan, and Charles Thomas. Cayce. Edgar Cayce on the Power of Color, Stones, and Crystals. New York, NY: Warner, 1989.[/ref]

The blue sky, a purple flower, the green grass all of these things do not have color themselves but are absorbed, reflected and transmitted from light frequency. This reveals that objects act as selective mirrors for the spectrum of light. Color is an illusion that is created from different wavelengths, reaction of objects and most importantly our visual perception. The Human eye is able to see color through the reflection of light particles.  Everything is made up of electromagnetic energy vibrating at different frequencies that correspond to sound, light and color. Each color is produced by wavelengths on the electromagnetic spectrum that produces its own frequency or vibration. It has been known for eons of time that color plays a major role in setting up a particular mood or state of mind.Color is one of the languages of the soul.  It affect one’s feelings, moods, perception, and emotions. 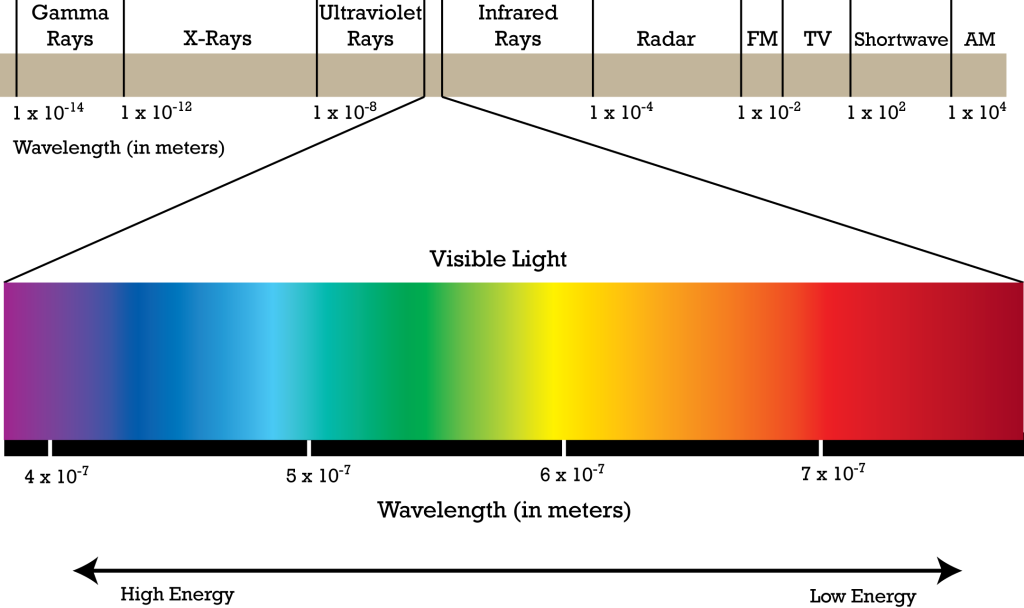 Color healing, known as Chromotherapy, can be implemented in a number of ways. Energy healers often use crystals and work with color healing during sessions. While they are working with an individual, they mentally will visualize a specific color ray into the patient’s aura and body. Oftentimes, the color used is inspired by the subconscious mind[ref]http://www.deeptrancenow.com/colortherapy.htm[/ref]Crystals also work through color healing. Therapists will also use color lamps or machines to project light through crystals to direct real light rays onto the body.  These methods have been scientifically shown to ease many physical and even psychological problems. For example “Emerald green light can help regenerate tissue and help heal bones where as Ruby red light can increase body temperature and increase metabolic rate.”[ref]Harding, Jennie. Crystals. Cincinnati, OH: Walking Stick Press, 2009[/ref] The German scientist Fritz-Alber Popp through his own research has proven that humans emit frequencies of light and that even our metabolism depends on the function of light.

Color healing connects to Crystals through the building blocks of matter, everything is connected by frequency and the frequency of color helps heal and re-balance the body. Various crystals reflect different shades of color due to their chemistry and mineral composition. We are drawn to the colors needed to create balance in our lives, the goal in all healing. The foods we eat, the clothes we wear, the objects around us and even the colors in our homes all relate back to color healing. We naturally attract the color of crystal we need to heal. After thousands of years Crystals became known for being associated with particular effects of healing within the body.

For instance, Bloodstone was popular with ancient tribes due to its striking colors of dark green and Red jasper inclusions. The red looked like blood so it became a talisman that many warriors would carry during battle to stop blood flowing from their wounds. The light pink Rose Quartz, the love stone is known for attracting love into one’s life and to help ease anxiety, many will find when they are stressed holding a rose quartz will help them. The striking pattern of Blue Kyanite is said to enhance communication and open us to the divine whereas Citrine is good for studying as it helps produce mental clarity. The Color of stones also can connect to chakras and various attributes that are associated with the individual chakra to help heal any imbalances within the energy.

How Do Crystals Work? 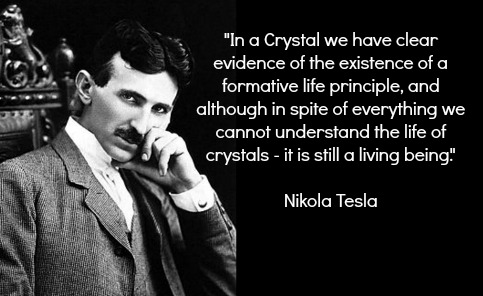 Crystal healing is a sacred practice while many dislodge it as pseudoscience, crystals do have power over our consciousness because we are made from the spectrum of light. Light is made from frequency and vibration. It is the belief that powers the frequency, the frequency fuels the action into being through the spectrum of light. The Native Americans believe in the philosophy that the Earth is a living being and that everything is alive. Minerals such as Crystals are conscious, they think and perceive while generating a frequency. It is know that even our planet Earth itself is composed of mostly iron, silicate rock, and oxygen.[ref]http://consciouslifenews.com/crystals-living-beings-ask-teal-episode-about-crystals-gemstones-video/1138514/[/ref] The energy of minerals is technically the original manifestation of the consciousness known as Mother Earth. When we are communicating with Crystals, we are communicating with the consciousness of Mother Earth. Everything has a frequency even Tesla has studied about the cause of vibration, frequency and energy within his work. The universe is run by the Law of Attraction, like attracts likes where the frequencies must match to co-exist with one another.  Therefore when you share a space with another “form” in any way, you automatically vibrate at the same level. In simple terms, when your body’s energy is connecting to the energy of the crystals you are telepathically communicating between frequencies. This vibration affects our own energy field through the Physical Law of Resonance where it affects the nervous system by transmitting information to the brain.  Teal Scott states it perfectly:

“Health is the natural state of any form within the universe. Therefore, the natural inclination and tendency of anything within the universe is that of balance, cohesiveness and ease. This means that the natural progression of vibration is to entrain and resonate in the direction of health. Because of this, when you share the space a crystal (or gemstone) that has a resistance free vibration, instead of the vibration of the crystal adopting a non-cohesive pattern, your energy will entrain with the energy of the crystal and adopt its cohesive pattern. Because of this entrainment effect, crystals and gemstones are incredibly adept at bringing us back into a vibrational state of health and harmony.” [ref]http://consciouslifenews.com/crystals-living-beings-ask-teal-episode-about-crystals-gemstones-video/1138514/[/ref]

Just like the Crystal Oscillators tuning into the frequency of the radio, Crystals can act like a tuning fork towards the frequencies of our body helping bring us back to a harmonic resonance and balanced health. We are essentially “re-tuning” ourselves to a healthy vibration. This is basically what is happening on the substructural layers of consciousness. It is the same concept of when you listen to a song on the radio that heightens your mood, you are resonating with the frequencies of music that is connecting to your vibrations you are emitting.  Working with crystals enables us to opens up a new door within our life where we can begin to witness nature’s magic within the palm of our hand. Crystals are truly living beings. The next time you’re outside realize that even Earth herself is breathing.